“There are two kinds of investors, be they large or small: Those who don’t know where the market is headed, and those who don’t know that they don’t know. Then again, there is a third type of investor: The investment professional, who indeed knows that he or she doesn’t know, but whose livelihood depends upon appearing to know”.

The above quote likely resonates with those who have followed any financial market for long enough, and the foreign exchange market is certainly not an exception. Nevertheless, those tasked with managing FX risk are often asked either where they think various FX rates are headed, or more commonly, to find out where “the pros” think they are headed. Far too often, someone in Corporate Treasury is asked to poll their relationship bankers in an attempt to determine the consensus FX rate forecasts, and then incorporate these directional views into the company’s hedging strategy.  Surely these highly paid economic PhDs must know something more than the rest of us?

Analysis of consensus* FX forecasts as compared to a naïve method** of simply using the existing spot rate as the best estimate of future spot rate finds that the pros consistently do WORSE than the naïve forecasting method.

Why is this?  As William Bernstein has pointed out, professionals aren’t necessarily getting paid to be accurate, and are often incented to make a bold prediction with the hope that it will come to pass.  Nobody gives much credit to a boring but accurate forecast that may be similar to today’s environment, but a shocking prediction will probably generate more discussions or clicks, and potentially a future high-profile interview if it turns out to be accurate.

Worse yet, when a certain directional view becomes widely held by the forecasters (and therefore most likely to show up in a consensus forecast), this is often reflective of investments already being made in that direction, with little fuel left in the market to add to the trend.  In absence of new money to help move in the forecasted direction, the markets often turn the other way, making these consensus forecasts contrarian indicators more often than accurate forecasts. 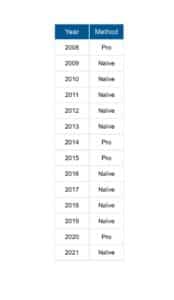 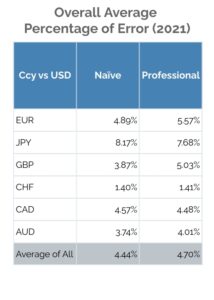 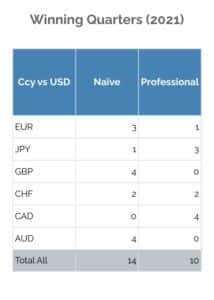 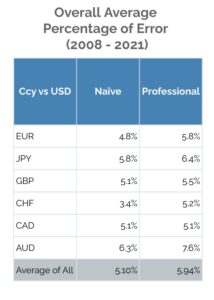 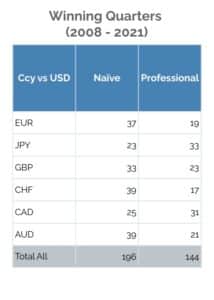 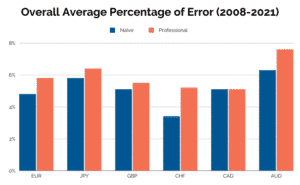 We use cookies on our website to give you the most relevant experience by remembering your preferences and repeat visits. You can choose to accept and agree to this use, or you can manage your settings to adjust your choices. If you do not allow certain cookies some areas of this site may not function as intended. By clicking “Accept”, you consent to the use of ALL the cookies. Cookie Settings Reject Accept
Privacy & Cookies Policy

This website uses cookies to improve your experience while you navigate through the website. Out of these cookies, the cookies that are categorized as necessary are stored on your browser as they are essential for the working of basic functionalities of the website. We also use third-party cookies that help us analyze and understand how you use this website. These cookies will be stored in your browser only with your consent. You also have the option to opt-out of these cookies. But opting out of some of these cookies may have an effect on your browsing experience.
Necessary Always Enabled
Necessary cookies are absolutely essential for the website to function properly. This category only includes cookies that ensures basic functionalities and security features of the website. These cookies do not store any personal information.
Non Necessary
Any cookies that may not be particularly necessary for the website to function and is used specifically to collect user personal data via analytics, ads, other embedded contents are termed as non-necessary cookies. It is mandatory to procure user consent prior to running these cookies on your website.
Save & Accept